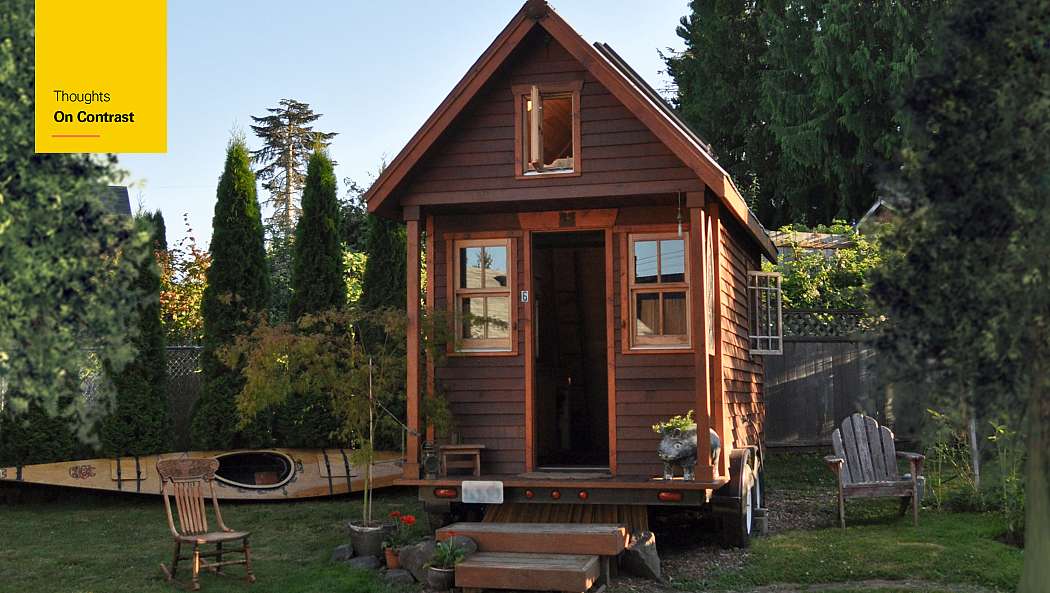 Living “Big” in a Tiny House: Is it even possible? To tackle this question, let’s consider two related questions. First, what’s a Tiny House? And second, what does living “Big” mean?

The Tiny House movement is a growing trend in American real estate, becoming a big thing only in the last decade or so. Today, increasing numbers of people are choosing to live in smaller homes as a lifestyle choice. And these are definitely houses, in the traditional sense of the term, not mobile homes. These tiny house people consciously resist the statistical trend of the average American homeowner, who today owns a home of around 2,400 square feet, an average size that has consistently risen since Census-takers first recorded an average square footage of 1,660 square feet in 1973. By contrast, tiny houses, though ranging in size, are typically around 400 square feet—or less.

Inhabiting 550 square feet has fueled my passion for living tiny.

Full disclosure: I’m a Tiny House person, too. My Charlotte home is 550 square feet, which is technically just small, not tiny—but close enough! As a result of school debt, I had the choice of renting for the next 10-20 years or going small. So, in 2009, at the peak of the economic downturn, I was thrilled to buy my current tiny house for under $45,000, more than 3 times less than my total student loan debt. Although the house was in a less-than-desirable condition and located in a transitional neighborhood in Charlotte, I felt that buying at that moment was my best option. I had to completely renovate the home to make it livable. It was a challenge and an adventure. To save money, my father and I did most of the work ourselves; a memorable experience I’ll cherish forever. Since the renovation, inhabiting 550 square feet has fueled my passion for living tiny. I’ve already designed my next home, a true Tiny House, but I’ve been holding off building it until I tackle that mountain of school debt—fortunately, I’ve just recently accomplished that. My Tiny mortgage payment of under $400 per month has granted me debt freedom in just 10 years. The next step, for my Husband and I, is to travel the country in our converted camper van, find land to go even tinier and build an off-grid 250 sq ft house.

So, getting back to the other main question—about living Big—requires a more interpretive answer. On one hand, some might define living Big in terms of owning and consuming the latest, greatest and grandest version of everything on offer in our ever-growing consumer marketplace. That kind of big living could be measured in terms of the size or number of our vehicles, smartphones, televisions, refrigerators, subscription services, furniture units or living spaces.

By living tiny, people discover they must prioritize quality over quantity, and quickly learn that bigger is not always better.

But for many other people, instead of measuring life by how much stuff they own, they define living big in terms of seizing opportunities, enjoying the present moment and becoming more aware of the life they live. This is the mindset of the tiny house dwellers. They explore whether there is truth in that foundational axiom of modern architecture, often associated with Mies Van Der Rohe (1886-1969): less is more. Tiny house people, most of whom are not architects like myself, tend to believe that less stuff means less distraction, less responsibility and more time to focus on what really matters in life. Tiny house living forces people to learn how to live with fewer things and explore a minimalist lifestyle that runs counter to the mainstream materialistic lifestyle. The biggest challenge people face when going tiny is that they inevitably acquire new things. Their smaller living quarters force them to make decisions about what is absolutely essential and valuable to them. It puts things into perspective, to say the least. By living tiny, people discover they must prioritize quality over quantity, and quickly learn that bigger is not always better. And another significant thing people learn about by living tiny is sustainability—especially if they design off-grid capabilities. Off-grid tiny homes can provide an even bigger sense of freedom from all the systems and constraints that tend to govern mass society today.

So, with all the luxuries available to us in the world of contemporary shopping, why go tiny today? Not to mention, RVs, campers and travel trailers have been around for decades—the famous Airstream trailers date to the late 1920s. Yet they’ve tended to be used for vacation travel. And since the 1950s, mobile homes and manufactured housing began to be marketed as an inexpensive dwelling option, targeted for a more working-class audience. While this new Tiny House movement shares affinities with nomadic or resource-restricted lifestyles, the Tiny House movement has become a kind of contemporary counter-culture that represents an alternative way of living. What’s new is not simply a design fad, but a larger social response to the persistent economic problem of personal debt. The Great Recession of the late 2000s perhaps created the biggest momentum for the Tiny House movement to go mainstream.

For Tiny House people, seizing opportunity means breaking free from the chains of debt and the debilitating economic state of working paycheck-to-paycheck. And that’s not just a problem for working-class Americans, but most middle-class Americans, too. The majority of Americans spend their entire adult lives working to pay off the debts for a lifetime full of big purchases: mortgages, cars, college, credit cards and material possessions. And in saving up for retirement, they’ve further immersed themselves in a sea of debt, struggling through a stressful situation for decades leading up to a (hopefully) more desirable retirement. Living Big in a Tiny House means not having to worry about buying that big house, not to mention getting away from the mindset that gets them buying a fancy car, outsized boat or expensive vacation. It’s the dream of financial freedom that usually only applies to a very few of the most wealthy members of our society. The rest of us spend our whole life trying to live large, which usually means living outside our means.

While it’s obviously a challenge to gather a big group of people in any individual Tiny House, more and more Tiny House owners are coming together to form communities, both virtually and in real life.

Tiny house living has given many people the ability to experience genuine liberty, assert more control over their life and inspire a better understanding of what truly makes them happy. The trend in the past decade demonstrates a shift in mindset for many people. Their revived American Dream is still focused on independence, freedom, opportunity and the pursuit of happiness, but has also come to accept that achieving these ideals in today’s economic conditions may require a different way of life.

While it’s obviously a challenge to gather a big group of people in any individual Tiny House, more and more Tiny House owners are coming together to form communities, both virtually and in real life. Currently, the Tiny House community thrives online through several blog spots and Facebook groups. There are bestselling books and television shows dedicated to Tiny Houses. There is also a Tiny House Conference that travels to a new location around the States each year, where people convene around all things tiny. The next conference is in March 2018 in Shook Kelley’s home city of Charlotte, North Carolina.

The aesthetic of the Tiny House, which often looks like a smaller version of a traditional home, has also given rise to the acceptance of living in a Tiny House community. For many years, trailer parks have carried a stigma which has prevented middle-class people from considering communities of smaller houses. The Tiny House movement has really become the trendy trailer, and through architectural style and charm, customized designs vs. pre-fabricated manufacturer materials and feel, a wider variety of people have become more open to the range of Tiny House options. Instead of the old RV Park or Trailer Park, I think we will start seeing more Tiny House Villages popping up around the country, where Tiny House dwellers can convene and create a community. For example, check out plans for a new community in Charlotte called Keyo Park West.

Instead of the old RV Park or Trailer Park, I think we will start seeing more Tiny House Villages popping up around the country, where Tiny House dwellers can convene and create a community.

Everyone is in pursuit of happiness, and the people who convene around the Tiny House movement are no different. On some level, we all intuitively understand that material possessions cannot provide sustained human satisfaction. True happiness comes through love, community, growth and adventure. Some people are drawn to tiny living as a challenge for themselves, to figure out their essential necessities and provide a clear perspective on what value means. Many people spend their entire lives working, to make more money, buy more stuff and pay off debts—and most of us have probably wondered, at some point: What would I do with my life if I could escape that cycle? Perhaps we could discover a more rewarding life, or perhaps enjoy spending more time with family and friends. A Tiny House might just let us dream big.

Everyone is in pursuit of happiness, and the people who convene around the Tiny House movement are no different.